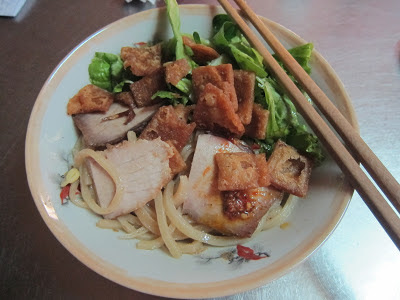 Since the day we landed in Saigon, every time we went in or out of the hotel there was a guy with a ponytail in front of the vietnamese fastfood next door. He talks to a line up of people on motorbikes, then in a big microphone, then to more people, it goes on and on all day. It took a while for me to figure out what's up: He's the drive-through guy! People stop by and order food, and he repeats it all for the kitchen, through his mic. "2 Saigon Beers, 2 sticky buns, 2 pork rice cakes, to go!" And everything is prepared at light speed. So we tried some fast food rice cake. Gotta eat like the locals!

Goodbye Ho Chi Minh City that everyone still calls Saigon. We were really starting to feel at home. The traffic was the most mesmerizing thing to observe.

Short flight from Saigon to Danang, which wasn't our actual destination. But Hoi An, 45 min south, has no airport. We drove right through Danang, a strangely developing city. The streets looked empty and many shops were closed. Lunch time siesta maybe? During our drive to Hoi An we barely saw the beach on the left because there are so many high fences blocking the view, with giant photos of "5 star castle coming soon" and "dream resort paradise" and other promises. A huge part of the coastline has been sold to big investors and blocked off from local fishermen. But the plans to build beach resorts and 5 star hotels are moving so slowly (or are on hold in some cases) that it simply looks deserted.

Once settled in our lovely Thran Van 1 hotel, Dad made me notice the French architecture and antique furniture in the room. Some of it might date back to the early 1900s. Our room was cramped and dark, but the hotel was kinda cute, with small indoor bridges crossing over the pool at the 2nd and 3rd floors, with flowers everywhere, actual good computers with fast internet, and a friendly staff.

We quickly organized our morning trip to My Son ruins (pronounces "mee son") for the next morning and we went hunting for a tiny home-restaurant called Ba Thanh, recommended by one of the staff girls. Surprisingly, I found it! It's someone's home. We tried their local dish called Cao Lau. It's a bit like pho, but there's no broth, thicker noodles, more greens, peanuts and croutons. Yummm!
We got caught in the rain on the way back - first rain of our trip - and took shelter under a blue tarp where old ladies were making little deep fried omelettes in a batter shell, for which I have no name. We felt compelled to buy one each. Oily but tasty!
I checked some of the tailor shops, and the price for a knee-length, sleeveless aodai (pronounced "ow-ee-aye") was always between $30 and $50. You get what you pay for! If you want quality silk and two fittings, pay up. So I went into BELI tailor, which is a family business compared to many other commercial shops and I ordered an orange aodai! First fitting tomorrow night.
We had dinner along the beautifully lit Thu Bon river. It's like a contest between every restaurant and bar: who has the most number of colourful lanterns? It's at riverside restaurant that we met Mr X (I'd rather keep his name anonymous). He was helping with orders and tables. He's a family man with many stories to share. "You motorbike to my house and I will tell you all about Vietnam War, and when I fought for South Vietnam. I will introduce you to my family, show you around my small village and then my wife will make a delicious traditional lunch for you. $12 per person." Sold. We're in. He's a good entrepreneur!


A little walk along the Thu Bon river brought us to the cheaper food, Vietnam style. Food is cooked outside, everyone eats the same thing (in this case, cao lau) and sits on small stools. But we ate already, so maybe tomorrow night.